074
The Blue Minotaur (Japanese: ブルーミノタウロス Blue Minotauros) is an enemy found in Karkaton Ascent and Ghontu Waste. Although it can appear alone, it has been known to appear in pairs and alongside other weaker enemies.

Like all Minotaurs, it carries a hefty metal hammer. It also wears armor, with two large pauldrons and spikes on its back. Its most distinctive feature is its bright blue skin and huge horns. It bears two Mii eyes.

The Blue Minotaur attacking a Mii with the Vampire job. 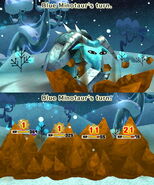