166
The Blue Lizardman (Japanese: ブルーリザードマン Blue Lizardman) is an enemy that turns up all over Galados Isle. They frequently come in pairs.

Lizardmen are deep blue bipedal lizards with spikes running down their backs. They carry a dagger and a shield and have a bandage wrapped on their right arm. They have Mii eyebrows and eyes, with each eyebrow and eye attached to one side of its head.

A Blue Lizardman in the Journal. 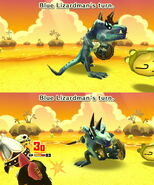 A Blue Lizardman attacking a mii. 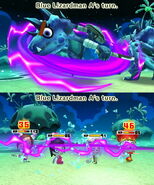