040
Blue Cobras (Japanese: ブルーなコブラ Blue Cobra) are monsters that appear in the Great Pyramid of Neksdor. On rare occasions, they can also appear in the northern desert of Neksdor Desert. Defeating this monster rescues a Mii's pair of eyebrows, a nose and mouth.

They tend to be accompanied by Mummies, and/or other Blue Cobras.

It's a very large, blue snake that looks unmistakably like a cobra. It has a random pair of Mii eyebrows, nose and mouth located on the front of its hood. 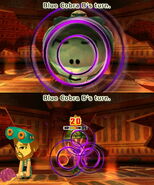