222
The Black Harpy (Japanese: ブラックハーピー Black Harpy) is a monster found during the postgame. It is a Harpy-type foe. It is notorious for its ability of blowing away party members, which results in their temporary removal from the battlefield.

Unlike the typical harpies of fiction, the Black Harpy is a small, gray-winged creature that is mostly black in appearance with four, cyan, insect-like legs; a tiny nose and cat-like mouth. This monster has a single Mii eye attached to its face.

A Black Harpy in the Journal.

A Black Harpy attacking a Mii. 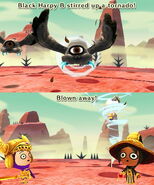 The Black Harpy blowing a party member away. 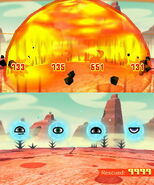 A Black Harpy with its guard down.

A Black Harpy defeated by Monster Dinner.
Add a photo to this gallery

Retrieved from "https://miitopia.fandom.com/wiki/Black_Harpy?oldid=43623"
Community content is available under CC-BY-SA unless otherwise noted.