010
Banshees (Japanese: バンシー Banshee) are monsters that appear in the Riverdeep Cavern, Castle View, and Wayward Woods. They are fairly strong for low levels and can use skills that alter a Mii's state.

Partially inspired from the mythical creature of the same name, the Banshee is a female spirit with long hair. It has a blue color scheme and wears gray clothing. Under Dark Lord's control, Mii eyes are attached to its face. It also appears to have stitching on its back.

Encountering a Banshee along with a Mole. 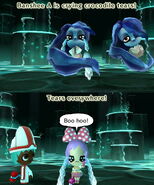 A Banshee crying, causing a party member to cry too.

A Bannshee that is distracted.

A Banshee attacking a Mii.

A Banshee as it appears in the Journal.

A Banshee defeated by Monster Dinner.

A Banshee defeated by Righteous Anger.

A Banshee as it appears in the Journal of the Nintendo Switch version.