Miitopia Wiki
Register
Don't have an account?
Sign In
Advertisement
in: Bosses, Monsters, Realm of the Fey,
and 3 more

During post-game quests, it may show up once again (with buffed stats) to steal the face of a quest client or their friend.

It is a lime green spider with the Middle Fab Fairy's (Traveler's or their friend's in post-game quests) face on its abdomen. It has three grey eyes, thin green legs and mandibles. Like all spider-based monsters, it always hangs from a web until defeated.

When the party first arrive at Elven Retreat, the Youngest Fab Fairy begs the protagonist to help her save her sisters. Doing this adds her as a guest party member. The first sister to look for, the Middle Fab Fairy, involves encountering this monster in Citrus Cave. Beating it will restore her face back.

Tip: Its spiders can get in the way, especially on a DPS Mii, but the Safe Spot will quickly sort that out.

It is fought alongside various enemies, depending on the level of the given quest.

The Arachno"Middle Fab Fairy" in the journal. 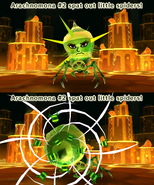 A Mii becoming infested with spiders.

An Arachno"Traveler" in a low-level quest battle, alongside two Trolls.

An Arachno"Traveler" in a high-level quest battle, alongside two Hobgoblin Mages.