Magic All
Spite
One More Time!

It is a humanoid female with red hair, gloves and clothing (with thick, puffy white collar), and reddish peach skin. It has what appears to be two pointy red crystals attached to or growing from the back of its head. It also appears to be wearing a ring whose gemstone is the source of its fire magic. The lower part of its body is shaped like a twister. Small flames swirl around its body. A pair of Mii eyebrows, eyes and a mouth are attached to its face part.

The non-boss version of Angry Queen has higher stats (except HP) compared to the boss version. The latter still drops no Gold and five-digit EXP, being a quest boss.

An Angry Queen in the Journal.

An Angry Queen in battle, along with two Ammonite Fossils.

An Angry Queen attacking a Mii. 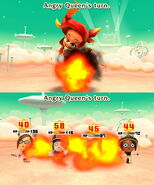 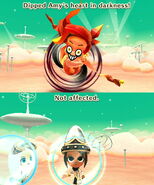 An Angry Queen attempts to make a Mii cranky, which fails.

An Angry Queen with its guard down.