They can also appear as regular enemies in temporary dungeons.

They can appear either with other enemies, in a duo or, rarely, a trio.

They function and are physically identical to other deployed robots, aside from their sickly green metal shells and large patches of mold overtaking them. They have Mii eyes, eyebrows and a nose on their faces.

Tip: If it appears in a duo/trio, the other (deployed) robot/s can actually fire its laser using its partner's cross-hairs, which can catch an unwary party off-guard. In any case, whale on them when they're charging unless someone's in dire need of healing.

Tip: If the robot targets two Mii characters, put one Mii in the Safe Spot while making the other Mii stay in his/her position. This is so then when the other Mii gets hit by the laser attack, the player can put the unharmed Safe Spot Mii back to where he/she was fighting, and the player can put the harmed Mii into the Safe Spot and wait for him/her to heal. This method applies to all Robots and monsters who can target Mii characters prior to their next attack.

Encountering the Ancient Robot along with 2 Ham Sandwiches.

The Ancient Robot Attacking a Mii. 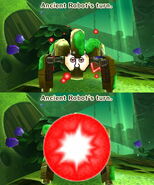 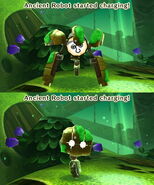 The Ancient Robot starts to charge up.

Ditto, in its charging state.

Encountering an Ancient Robot during the Youngest Fab Fairy's quest.