151
The Alien (Japanese: 宇宙人 Alien) is an enemy which shows up in Otherworld and in mid level temporary dungeons. It tends to appear alone, in twos, or even threes. Sometimes, it'll team up with other enemies, such as Space Goblins. The Alien wields a ray gun which it fires in combat.

Defeating it will relinquish a pair of Mii eyes.

It is a five-legged light blue alien with a bulbous head bearing a single Mii eye. It holds a yellow gun in one of its thin arms.

Tip: If a Mii has been made "old", put them in the Safe Spot. They'll be useless until the effect wears off.

An Alien in the Journal. 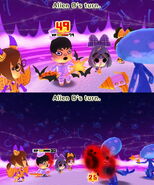 An Alien attacking a Mii with the Vampire job.

An Alien aging up a Mii, turning them old.

An Alien defeated by Monster Dinner.

An Alien defeated by Righteous Anger.