125
Aging Robots (Japanese: 古びたロボット Old Robot) are enemies found in Nimbus. Being old, they move much slower and are weak compared to their newer counterparts. They tend to be paired with other, stronger monsters, but can sometimes be encountered alone.

Defeating one will relinquish a pair of Mii eyebrows.

It is an old, abandoned robot. Its shell has gone rusty lime from age and moves on one simple wheel. The whites of its "eyes" are its aged laser disc. When struck, its "head" pops out briefly. It has Mii eyebrows above its "eyes".

Encountering The Aging Robot along with 2 Robo-Pengy. 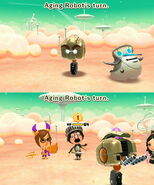 The Aging Robot attacks a Mii.