Magic All
Gaze
One More Time!

177
"Traveler's Friend" (Japanese: 名画「Mii's name」 Masterpiece "[Mii's name]") is a boss monster. It can be found in one-time dungeons that only show up during quests.

It is an animate painting of Otani Oniji II, but with the Traveler's friend's face replacing the original painting's face. The painting is framed in a brown frame.

It is fought alongside various enemies, depending on the level of the given quest.

This monster has two different stats depending on what quest level it's encountered in.

A Traveler's Friend in the journal.

A "Traveler's Friend" in a low-level quest battle, flanked by two Gold Glyphs.

A "Traveler's Friend" in a high-level quest battle, accompanied by a Replica Dark Lord. 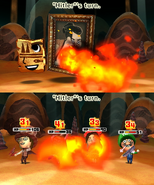 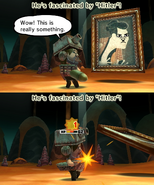 A Mii fascinated by a "Traveler's Friend".