185
"Traveler"puter (Japanese: "Mii's name"ピューター "Mii's name"puter) is a quest-exclusive boss enemy that can be encountered only in temporary dungeons as a boss. It's normally fought alongside two Doo-Whoppers, but can appear with two Clever Running Noses or two Brand-New Robot's.

It greatly resembles the Retroputer, only colored entirely in black with red buttons. The Traveler's face appears on its screen.

Which Travelers' Hub quests that feature this monster seem to be complete random, as do the dungeon location and the quest rewards.

A "Traveler"puter in the Journal.

The Traveler"puter attacks a Mii. 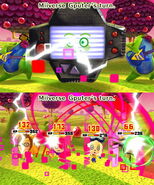 The "Traveler"puter's magic attack on all teammates.

A "Traveler"puter along with 2 Clever Running Noses