193
"Traveler"otaur (Japanese: "Mii's name"タウロス "Mii's name"tauros) is a monster that can only show up in one-time dungeons that appear during post-game, specifically in mid-level quests from the Travelers' Hub.

It looks exactly like other Minotaurs before it, though its only distinctive feature is its bright red skin. It bears a Traveler's or Traveler's Friend's face. 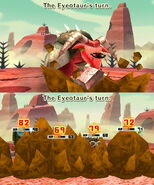