111
The Traveler Woof-o'-the-Wisp ("Mii's name"ちょうちん "Mii's name"-Chouchin; "Mii's name" Snot Bubble) is a boss found in Peculia's Eerie Road while hunting for the Sky Scraper Jewels. This is the boss of a quest given by someone in the Traveler's Hub.

The boss is a light-blue wisp emerging from the nose of Toby. Toby himself has not changed, except for being asleep while the boss is active.

This monster appears in one of the Travelers' Hub quests that appear in the main story after the discovery of The Sky Scraper. Said quest's client is a Cat who lost their dog, Toby. Accepting this quest allows the client to tag along and the Peculia map to open up more to include the Eerie Road area.

At the deepest part of Eerie Road, the quest client's face ends up floating away and attached to the sleeping Toby's snot bubble, forming this monster. Defeating it will restore the Cat's face, allowing said client and Toby to be properly reunited. The player is then rewarded with one of the Sky Scraper Jewels before the duo leave.

Tip: The boss can heal quickly and effectively, so keep doing as much damage as possible and hope the Wisp doesn't heal too much.

A "Traveler" Woof-o'-the-Wisp in the Journal. 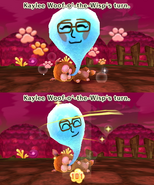 The "Traveler" Woof-o'-the-Wisp healing itself.