One More Time!
Magic All
Stone

233
"Traveler" Medusa (Japanese: "Mii's name"メデューサ "Mii's name" Medusa) is a boss monster that can be found in post-game temporary dungeons. It is typically accompanied by two Gold Crystals during battle.

Being based on I, Medusa and its variants, this monster is based on Medusa from the Greek mythology, being a monster in the form of a human female with living snakes as her hair. To differentiate it from the other Medusa-based monsters, "Traveler" Medusa has light blue "hair", head and arms, and a purple body. Unlike I, Medusa, the snakes on "Traveler" Medusa have beady eyes instead of a Mii's and its dress-like scales cover its shoulders. 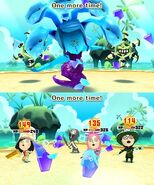 "Traveler" Medusa with its guard down.