192
"Traveler" Bread (Japanese: "Mii's name"パン "Mii's name" Bread) is a boss monster. In battle, it is accompanied by either two Silver Woof-o'-the-Wisp's, two Calamitous Armor's, or an Extra Spicy Burger.

The "Traveler" Bread is three slices of floating, animate bread, each with the Traveler's (or their friend's) face on it.

A "Traveler" Bread's strength varies depending on what quest level it's encountered in.

"Traveler's Friend" Bread and an Extra Spicy Burger in battle.

The "Traveler" Bread attacks three Miis at once.

The "Traveler" Bread with its guard down. 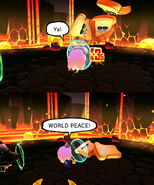