This type of monster also makes an appearance as a Travelers' Hub quest monster, as it looks the same (albeit with a Traveler's or their friend's face) and doesn't have an individual entry in the Monsters section of the Journal. Its moveset is even the same, though it's significantly stronger, being a post-game encounter.

It is a purple cobra with the Prickly Husband's (Traveler's or their friend's in the post-game) face attached to the front side of its hood. It's larger than other cobra-based monsters.

In the post-game, "Traveler" Cobras have different stats depending on quest difficulty. Higher level quests will result in the toughest version of the Cobra. 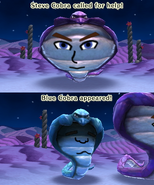 An encounter with the Traveler's Hub variant.