089
The "Party Member" Armor (Japanese: ヨロイの"Mii's name" Armor "Mii's name" ) is the last boss fought in the Dark Lord's Castle before the Dragon and the castle's owner.

It bears the face of the first party member recruited, who will be freed upon defeat.

The "Party Member" Armor is a spectral orange flame inhabiting a metal breastplate, which wears the face of the first-recruited party member. The armor itself supports spiked shoulder pads with a scratched and battered exterior.

Near the end of the Armory section of Dark Lord's Castle, the party encounters the very first Party Member the player recruited, only to find they are faceless. The party then hears clattering noises as the monster shows up, initiating a battle. In battle, the "Party Member" armor is not difficult on its own, only being able to deal moderate damage. However, it can also summon Spirit Swords or Spirit Shields to assist it, covering for its weaknesses. Once defeated, the first teammate's face is returned, allowing them to rejoin the player's party.

The Travelers' Hub quest variant can randomly show up in the end of a temporary dungeon, this time with the client's face. Defeating it will clear the quest. It is fought alongside 2 Calamitous Armors.

The "Party Member" Armor in the Journal.

The "Party Member" Armor in battle. 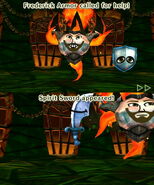 Encountering a "Traveler" Armor in the post-game with two Calamitous Armors.