009
"Lovey-Dovey Woman" Mouse (Japanese: ネズミー Mouse), or "Traveler's Friend" Mouse in quest dungeons (not to be confused with the blue variant), is a boss monster.

After the Dark Lord's attack on Greenhorne and theft of the Lovey-Dovey Woman's face, your party has to face this monster in Strange Grove. It's accompanied by two Smileshrooms when encountered there.

This type of monster also makes an appearance as a Travelers' Hub quest monster, as it looks the same (albeit with a Traveler's or Traveler's Friend's face) and doesn't have an individual entry in the Monsters section of the Journal. Its moveset is even the same, though it's significantly stronger, being a post-game encounter. This version is fought with either three Mice, four Fossils, or two Devilish Skulletons.

It's a huge armless mouse with the Lovey-Dovey Woman's (Traveler's or their friend's in post-game quests) face attached to it. Its round ears, toeless feet and ball-tipped tail are orange. Its chubby, gourd-shaped body is yellow with light yellow belly marking. 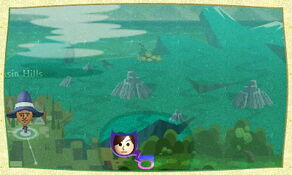 Once the the protagonist and their three teammates approach deep into the Stange Grove, the party will find the Lovey-Dovey Woman's face floating about, who is frightened about the situation.

Her face will then be placed onto a big yellow mouse, who is then accompanied by two Smileshrooms. While the "Lovey-Dovey Woman" can attack one Mii along with the Miis adjacent to them, the Smileshrooms can also cause them to burst into laughing. Despite this, the party is able to defeat the mouse and its cohorts, saving the Lovey-Dovey Woman. She, along with the Lovey-Dovey Man, will celebrate the return of her face. Both of them thank the protagonist and give them three Game Tickets as a reward.

The "Lovey-Dovey Woman" Mouse is one of the Greenhorne bosses encountered sometime after the protagonist has recruited both their third and fourth teammates. The "Traveler" or "Traveler's Friend" Mouse however, is a randomly decided Traveler's Hub quest boss.

A "Lovey-Dovey Woman" Mouse in the Journal.

The "Lovey-Dovey Woman" Mouse with its cohorts, two Smileshrooms

A mouse encountered in the postgame, with the face of a Traveler's Friend instead of the Lovey-Dovey Woman