124
The "Friend from Nimbus" UFO is a boss monster that is first encountered during the very first Nimbus quest in the main story. Later, it can be found in one-time dungeons that only show up during quests.

One of the first quests when the Travelers' Hub is first unlocked involves finding a Traveler's friend who ends up in Nimbus. It turns out that the Friend from Nimbus has their face stuck on this monster. During battle, this monster is accompanied by two Mecha Goblins.

After freeing the Friend from Nimbus, the protagonist asks them about the Darker Lord's whereabouts. Turns out they know about the villain as well as the presence of a giant tower in the sky, revealing its location on the world map.

The post-game quest variant can randomly show up in the end of a temporary dungeon, this time with the client's face. Defeating it will clear the quest.

Tip: All eight of the party's HP Bananas will almost certainly be stolen, as it is immune to status effects and is even stronger than a Giant UFO. Aside from that, it does hefty damage, so keep healed up; you do not want to have to rematch it.

This boss can also be encountered in post-game Travelers' Hub quests. Its strength depends on what quest level it's encountered in. 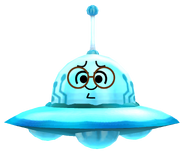 The "Friend from Nimbus" UFO in battle with two Mecha Goblins.

The "Friend from Nimbus" UFO attacking a Mii.

The "Friend from Nimbus" UFO stealing a Mii's HP Bananas.

Encountering a "Traveler" UFO in the post-game.