047
"Dancing Guide" (Japanese: 名画「Mii's name」 Masterpiece "[Mii's name]") is a boss monster. It is one of the few painting-based bosses.

It is an animate painting of Mona Lisa, but with the Dancing Guide's face replacing the original painting's face. The painting is framed in a brown frame.

After Dark Lord's attack on Neksdor Town, the protagonist has to recover the stolen faces which are scattered around Neksdor. One of the town residents, the Dancing Guide, has her face attached to this monster. Defeating it will free her face.

Restoring the Dancing Guide's face will have her reward you with one of the Neksdor Jewels.

This monster also appears in post-game quests. Which Travelers' Hub quests that feature this monster seem to be completely random, so do the dungeon location and the quest rewards. It is fought alongside 2 Puppetmasters.

The "Dancing Guide" in the Journal.

The "Dancing Guide", flanked by its Hieroglyph minions. 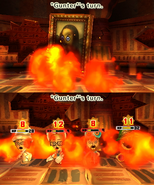 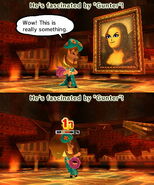 A Mii fascinated by the "Dancing Guide".

Encountering a "Mii" (Mona Lisa Painting) along with two Puppetmasters.