I haven't beaten Depair yet, and I have beaten Dread a lot, so imma go Dread for now though that may change.

I did it on 3DS at about level 45, and on Switch level 44 each. Difference being on 3DS I got a Traveler's Hub person to help (a Cleric) and I didn't on Switch.

I've streamed with under 20 subs, that's not a limit.

Ok, why not. I share a different Mii whenever someone posts one of these, so here we go!

What they're wearing: I don't mind, though I tend to prefer either the Smart, Suit-Like outfits or the natural cat loking ones. Her main costume is Stationmaster Cat Suit but that's second last, you can't get that in a playthrough, and any claws work.

I knew I could beat the Tower of Dread sprinkless on my current playthrough, but I kept on losing due to my forgeting to protect my Cleric in the safe spot, usually on Dark Sun but sometimes Evil Sage too.

I don't mind losing, but I lost in a way I could have easily avoided. Which is a lot more annoying.

There's been worse but I can't remember them.

Yeah it's pretty easy, but it still took me a little while since I've tried to do it as early and at as low a level as possible. As soon as I beat the Dark Sun I'm on the tower.

I was attempting it on stream earlier and I actually beat it! In like, 9 attempts from when I first tried. Now I've finally unlocked the Tower of Despair! Can't wait to try it out! 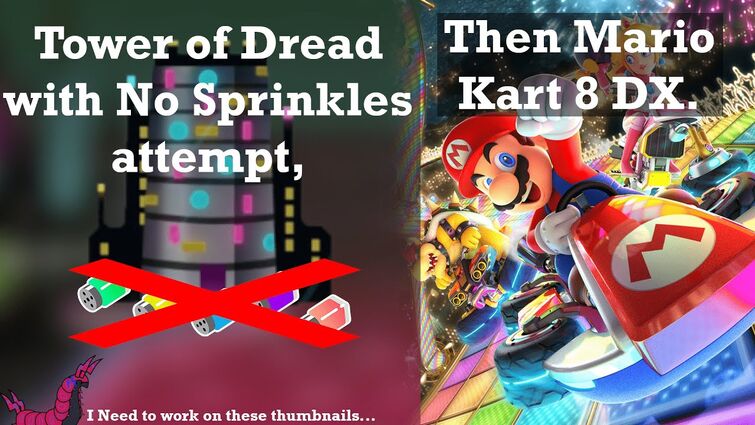 Attempting the Miitopia Tower of Dread with No Sprinkles, then playing Mario Kart.YouTube

Marsha is an OC I've been using a lot for years now but it based on nobody in paticular.

Dee-Dee's from my original playthrough but is based on nobody in paticular.

Hilo is supposed to be the son of the Pop Star from my original Miitopia playthrough. Both are based on nobody.

Actually, all my OCs aren't based on anybody, though my Theif Prezza has extremely minor inspiration from Tressa from Octopath Traveler, mostly in her name

A reply to The Legendary Shadow Saiyan
0

The gameplay isn't copy/paste, but the location's looks, travel music, map, all identical. I think Galados and Fey are supposed to be connected in some unconfirmed way, but apart from all that I get what you're saying.

A reply to The Legendary Shadow Saiyan
1

@The Legendary Shadow Saiyan By the way, I notice you said "Uncharted Galados is hard for no reason, and does not relate to the elf job in anyway."

It relates to the elf job because the area is literally a copy/paste from Realm of the Fey, so I assume it's supposed to relate that way. And it's hard because Elf is supposed to be late-post game.

A reply to The Legendary Shadow Saiyan
2

I did one myself.

Greenhorne: I just love this area. Perfect introduction, mots memorable moments, actually great structure which none of the other areas replicate, and is overall a perfect area in my opinion (10/10)

Karkaton: Rescuing all of your teammates again is just special. Teaming up with the Great Sage is great too and what I especially like is finally seeing all your team jumbled up together. It's just so nice... The Dark Lord's Castle has the most annoying enemies in the game though. (9/10)

New Lumos: Great post-game area. Lack of structure but this area single-handedly saves the post-game of Miitopia. Tower of Dread's a fantastic final challenge and while I haven't got to the Tower of Despair yet I know I'll love it. (8/10)

Otherworld: Good final area, but short in my opinion but it doesn't need to be long. It sets up for the Darker Lord well enough and that boss is too good for me to rate Otherworld low. (6/10)

Neksdor: Good area, doesn't hold a candle to Greenhorne but it doesn't need to since Neksdor's a great area in it's own right. It also introduces some fantastic new jobs too. Overall great are but not much to say about it. (7/10)

Sky Scraper: Great build-up, great and fun area with pretty good pacing. Refighting all the bosses is cool, hard, and surprisingly not repetitive and doesn't feel like padding. Sometimes it feels a bit slow, the S tiers tend to have simply more engaging action, but that's about it. (7/10)

Traveller's Hub: Quests are cool. That's all I can say about the Traveller's Hub. The Quest Section in the story is just slow in my opinion, and even post-game quests aren't too exciting, but I still think it's great that it exists. Though I wish there was more to the section in the story. That part just felt like padding, it's frustrating at times, and you can't get into any of the areas there in my opinion. I'm conflicted on this one. (5/10)

Galados Isle: Not gonna lie don't fully get the hate for this one. The beginning is my favourite-looking area in the game, and Unchartes Galados is hard for a reason. The island has tons of flaws (The uncalled for huge difficulty spike, Uncharted Galados just being Realm of the Fey's design, not much to do) but I still quite like this area. I can't rate it too highly though. (Great Music though) (5/10)

Realm of the Fey: Eh, kinda underwhelming. The structure is eh, the atmosphere and music is eh in my opinion, the new jobs are pretty eh, the bosses are forgettable, and overall it's the 'eh' region in my opinion. Never been able to grow attached to it. It doesn't really have the charm of Greenhorne and Nekdor, the buildup of Karkaton and Sky Scraper, or whatever makes New Lumos so great. I have to praise it for it's length though, it's definitely not empty and the region is definitely fleshed out, and that's all I can ask for. (5/10)

Nimbus: More interesting then Powdered Peaks and Peculia since it alctually feels like it has a reason to exist. The Nimbus quests, in my opinion, are the best story quests in my opinion and the Plants are cool. It's pretty decent. (4.5/10)

Powdered Peaks: It's too empty. It's a shame, this area is absolutely gorgeous and I love the way it looks, but it's just so bland and uninteresting gameplay wise. Especially since Tshilly Peaks is hidden behind a post-game quest of all things. I wish this area was more fleshed out so badly... (3/10)

Peculia: Only area I actually dislike. Copying from other worlds is not cool in my opinion, it just feels lazy and it's hard to enjoy it in my eyes. On top of that, the area just feels tedious despite it's shortness since the teleporting makes the area feel much longer then it is. Manor Macabre's cool but that's all I can give it. (2/10)

Running Nose I like because of the pun name that took me a few months to get.

How'd you find my speedrun anyway?

This has to be one of the most catchy themes in the game, whenever I do anything in New Lumos on a playthrough this gets stuck in my head for the whole day. Great theme.

A reply to Vio Amari
0

I played it through 5 times. And I was more then happy to spend £40 to play it again on the Switch.

Darkest Lord and Dark Sun are really tough but fair boss fights, and they're also the only really good bosses in the game. Why are they even on here?

Very Rare Snurp is a royal pain in the neck. But let's be real- people actively hunt them down, so if anything they're great. Unlike the other enemies who are forced upon you.

Haven't done Tower of Despair yet, so no idea on Boss Snurp but I'm sure I'll like it. It sounds like a really tough boss fight, which is right up my street.

Hot take- Fiends are not that annoying. Unless you have no physical attackers.

And Orochis are really annoying, so I picked that- but the Red Dragon is worse. Not the boss form though, that one's fine.

Ah yes, cooltext.com. It's a great website. These look good, and I applaud you for actually doing proper editing on there (so many people just take the defaults and leave it at that...)

Never used a Chef to the level it gets that move, I've done 6 playthroughs and never seen this move...

A reply to The Legendary Shadow Saiyan
1

You could record any interesting battles in the Battles section of the menu to input them. If any of them were interesting.